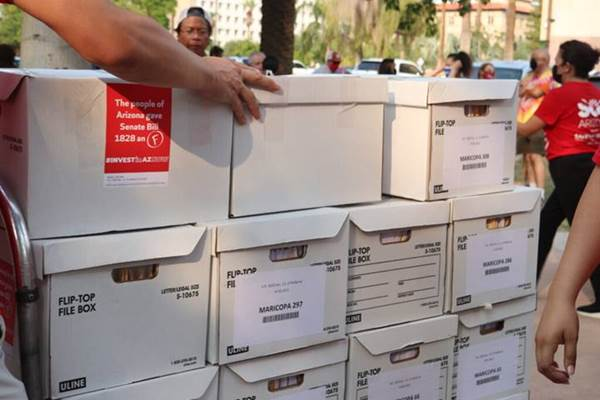 Cardboard boxes filled with hundreds of signed petitions from voters across the state were stacked near the Arizona Capitol on Tuesday, Sept. 28, 2021. The day marked the deadline to submit signatures for measures seeking to block tax legislation passed this year. The Invest in Arizona coalition gathered more than the required signatures to stop two laws that are part of a historic tax cut plan that’s estimated to cost the state $1 billion in revenue. Photo by Laura Gómez | Arizona Mirror

Arizona voters will get the final say on Gov. Doug Ducey’s legacy income tax cut package that was signed into law earlier this year, after a coalition of public education groups successfully forced a public vote in 2022.

Ducey’s income tax cuts, which serve as his legacy policy achievement during his two terms as governor, dramatically reform Arizona’s tax system. Instead of a progressively graduated system with a maximum rate of 4.5%, Arizona will shift to two income tax rates: 2.55% for people who earn $27,272 annually and 2.98% for those who earn more than that. The tax law changes in Senate Bill 1828 also create a single 2.5% rate as soon as 2023 if state revenues hit certain triggers.

Legislative budget analysts concluded that it would cost the state about $1 billion annually. And while all taxpayers would see a reduction in income taxes, the wealthy receive the largest benefit: the poorest Arizonans would save $1 a year while the wealthiest would keep an average of nearly $350,000. The typical Arizona family would save about $42 a year, on average.

The tax cuts were designed to shield the wealthy Arizonans from the Invest in Education Act that voters approved in 2020. That voter-approved measure, also known as Proposition 208, imposes a 3.5% surcharge on income greater than $250,000 for individuals and $500,000 for couples, with the money directed to public schools to increase teacher pay and boost overall funding.

Prop. 208 will likely never go into effect. The Arizona Supreme Court ruled in August that it’s subject to the Arizona Constitution’s spending limits for K-12 education, setting the stage for a new trial court ruling that is expected to invalidate the measure.

The legislative analysis shows that Arizona families making less than $100,000 a year will see single-digit percentage reductions in the taxes they pay, while the wealthy reap much larger savings. Families making more than $200,000 will save more than 22% of their tax bill. Those savings jump to more than 40% for households earning more than $1 million a year.

The coalition that passed the Invest in Education Act in 2020 came together this year under the name Invest in Arizona to block the tax cuts. Arizona’s constitution allows for citizens to refer new laws to the ballot for public approval if they gather enough signatures within 90 days of the legislative session’s end, and Invest in Arizona submitted 215,787 petition signatures.

There are other hurdles the Invest in Arizona campaign must overcome before the referral can go to the ballot. The Arizona Free Enterprise Club, a conservative advocacy group, has filed two lawsuits challenging the referendum. The first lawsuit argues that the tax cuts are not subject to citizen referenda, and is awaiting the judge’s ruling following oral arguments on Nov. 5. The second suit, which is on hold pending the outcome of the first case, challenges the validity of the referendum campaign’s signatures.

Initially, the Invest in Arizona campaign sought to stop three laws from taking effect this year: SB1828; Senate Bill 1827, which caps the tax rate at 4.5% for those with incomes greater than $250,000 for individuals or $500,000 for joint filers; and Senate Bill 1783, which creates a new business individual income tax with a 4.5% flax rate that some taxpayers can opt into — and any taxpayers who do so would be exempt from the Invest in Education surcharge.

The coalition didn’t submit signatures to block SB1827, and the effort to refer SB1783 to the ballot failed, missing the threshold by 18,461 signatures.